Jost Hermand, Vilas Research Professor of German Emeritus, died unexpectedly in Madison on October 9, 2021. With his passing the University of Wisconsin–Madison lost a member of its faculty who made enormous contributions to both its national and its international reputation, as well as to the field in which he worked. Born in Kassel on April 11, 1930, he grew up in Nazi Germany, attending school in Berlin before being evacuated to camps in the East in the fall of 1940 in connection with the National Socialist Evacuation Program for Children. After the war, he completed secondary school in Kassel and entered the University of Marburg, finishing a doctorate summa cum laude in 1955 with concentrations in German literature and art of the twentieth century. He then settled in East Berlin to work together with his mentor Richard Hamann on a book series being published by the East German Akademie Publishing House under the broad title “German Art and Culture from the Wilhelmine Period to Expressionism,” only to be expelled from East Germany, a victim of Cold War cultural tensions. Unable to secure a teaching position in West Germany, he decided to accept a position at the University of Wisconsin–Madison in 1958, the place he called his home for the rest of his life.

In the beginning, Madison was interesting but totally foreign to Hermand. He had never learned English, did not understand football, hamburgers, cheeseburgers, and so much more, nor was he comfortable teaching elementary German language and literature in Wisconsin’s classrooms. Yet he developed close relationships with several German Jews on the UW faculty who had fled Nazi Germany, including the librarian/poet Felix Pollak, the violinist Rudolf Kolisch, and the historian George Mosse, grew to love the Arboretum and the Allen Centennial Garden, thrived as a scholar, and already in 1967 was awarded a William F. Vilas Research Professorship. Moreover, afflicted with a troublesome speech impediment, he surmounted this, too, and became a celebrated classroom and conference lecturer. He was one of very few Germanists anywhere who enjoyed world-wide fame. This led to global lecture tours, numerous academic awards, and visiting professorships throughout Germany and the United States, including 17 years as an Honorary Professor at the Humboldt University in Berlin, where he routinely taught one semester each year after his retirement from the UW.

Hermand’s entire professional life was characterized by his sympathy for the downtrodden, probably the consequence of the horrible bullying he had experienced as a child in Nazi Germany. Indeed, he was an expert on precisely the authors and movements the Nazis despised, challenging the established canon, placing literary interpretation in new contexts, and highlighting minority voices and ecological concerns. His missionary commitment to the progressive traditions of German culture and his dogged critique of reactionary, nationalist trends marked the partisan career of a provocative and innovative thinker. His spartan lifestyle matched his sharp, sometimes polemical style, while his humor, generosity, and patience conveyed to students, colleagues, and friends how much he enjoyed what made his life meaningfulteaching, writing, thinking, conversing.

Hermand’s expansive knowledge and scholarly productivity are legendary. He authored 66 books on a wide range of subjects from literature, art, and music history, and co-authored eleven more. Two additional books will appear in 2022; and he had plans for his next projects. In addition, there are 28 edited books, 43 co-edited books, hundreds of articles, and countless lectures and media interviews to his credit. But he was also a veritable and award-winning powerhouse in the UW classroom. He introduced interdisciplinary courses on a wide range of topics that had not been part of the traditional curriculum in German: Jews in German Culture; German Studies and Politics; Ecology in German Culture; Culture of the Wilhelmine Age; Culture of the Weimar Republic; German Exile Literature; Brecht’s Adaptations of World Literature; and a popular, large-enrollment undergraduate Nazi Culture course he began teaching after his retirement. He directed 60 doctoral dissertations and served on the doctoral and defense committees of numerous others. He assisted many students with the publication of their dissertations and helped them attain teaching positions. A significant number have become well-known leaders in their field. His contribution as their teacher and mentor influenced them and will continue to influence future generations of teachers and scholars in German studies.

Hermand played no small role in the transformation of traditional American German studies from literary philology to a broader and more inclusive interdisciplinarity. As co-founder of the annual Wisconsin Workshops, which began in 1969 and will continue without him in 2022 with number 52, he led the way toward the field’s redefinition and revitalization in the 1970s and 1980s. These conferences allowed younger as well as established German and American scholars to share their work and establish contacts, putting Madison on the map for Germanists everywhere. It was said in Europe that to be anyone in the field, one had to “sing” in Madison. More than 40 of the Wisconsin Workshops resulted in monographs, and the proceedings of all of them through the year 2000 are available through open access in the UW Digital Library Collections. In addition to this, Hermand served as the editor of the series “German Life and Civilization,” published by Peter Lang, from its beginning in 1987 until his death. This series now includes 73 volumes on a broad range of topics.

The German media reacted immediately to the news of Hermand’s death with numerous tributes and obituaries that celebrate his life and honor his accomplishments. Two of Germany’s top newspapers, the Frankfurter Allgemeine Zeitung and the Süddeutsche Zeitung, published lengthy articles, both with photographs; and the publishing houses where many of his books appeared also noted his passing with words of praise. Many of his former students and colleagues wrote to share their memories, stressing his dedication to teaching, his commitment to his students, and their indebtedness to him. Last year, on the occasion of his ninetieth birthday, many sent greetings and took part in celebrating the occasion by contributing to a living memorial on campus to honor him and his workthe “Jost Oak,” which is planted in the Allen Centennial Garden and marked with a dedicatory plaque.

The Jost Hermand whom we knew was a pleasant, quiet, kind, and unassuming man whose humility stood in stark contrast to his many accomplishments and honors. He was a gifted teacher, provocative, honest, fearless, and never afraid to teach uncomfortable truths. His colleagues, friends, and students could always count on his generosity with time, advice, and assistance; and his generosity will live on, as he has left his entire estate to the UW Foundation for the German Program’s Hermand Graduate Student Fund. He will be deeply missed. 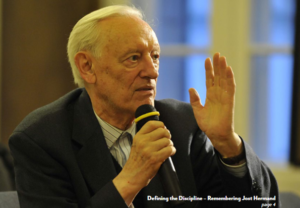 On October 9, 2021, Vilas Research Professor of German emeritus Jost Hermand died unexpectedly. He had just finished two new books currently in press, one on German cultural history (DIE WA(H)RE KUNST. Deutsche Kultur im Sog sozioökonomischer Wandlungsprozesse) and one on meaning in music: Hearing Music in a Different Key. Ideological Implications in Works of German Music (forthcoming in 2022 in the “German Life and Civilization” series). As always, he had already plans for new projects. His vast archive of notes, correspondence, calendars, photos, and other documents will be kept in the DLA (Deutsches Literaturarchiv) Marbach.

Jost Hermand joined the Department of German in 1958 and helped put the Department – and the UW–Madison – on the map nationally and internationally. He remained active after he attained emeritus status in 2004, publishing books and giving lectures in the US and abroad. He may have been the longest-serving William F. Vilas Research Professor on campus, having been awarded the honor in 1967. For decades, he was among a handful of Germanists with world-wide fame and name recognition, in demand all over the world as a speaker. He was a prolific scholar with a publication list that spans 44 pages and an unparalleled breadth of knowledge, but more importantly, he was a tireless innovator and pioneer
who shaped the field of Germanistik in major ways, helping to make it the vibrant field of “German Studies” it continues to be today by challenging the established canon, placing literary interpretation in new contexts, exploring German-Jewish culture, and highlighting minority voices and ecological concerns. The annual Wisconsin Workshop conferences he inaugurated more than 50 years ago introduced ground-breaking topics; the tradition continues today, with the 52nd Wisconsin Workshop (“German Studies and Beyond”) planned for fall 2022.

His graduate students praise him as an inspiring teacher and mentor: dozens of UW-Madison alums who did their PhD work under Hermand and who now hold faculty positions across the US and internationally are continuing his legacy. For Hermand’s 90th birthday last year, alumni and friends dedicated an oak tree in Allen Centennial Gardens on campus to him that bears a commemorative plaque. (See article and pictures in “Mitteilungen aus Madison”: https://gns.wisc.edu/gns-newsletters/)